Ciaphas was born to Lord Ibram and Lady Amberly Shae of Shael. Both were killed during the Teleport invasion, the family home burned to the ground and Ciaphas left to die in the aftermath.
Found later by a patrol and taken to a refugee camp Ciaphas was chosen for the Commissarait and he along with twenty other orphaned children were taken to Irisk Training Facility. 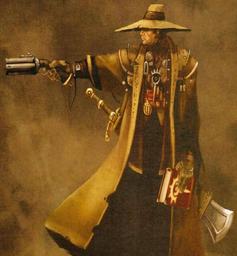