Twin pistol-wielding ex-constable of the RHC.

Walker used to live in a small bedsit in Bosum Strand, but has now moved into a house he has bought in North Shore with his fiancée Ilana.

He covered up the assault by Sorvad Heron of a woman in custody, tampering with evidence. An Internal Affairs investigation followed, but no evidence against any of the team was found.

Walker is one of the Reincarnate. Outside the walls of Alais Primos four hundred years ago, he found himself in battle against the god Srasama herself. As he hit her, he looked into her eyes for a moment before they were drawn apart in the battle. Soon afterwards, she died. He doesn’t know if it was his blow that killed a god, or simply one of many.

Whichever it was, since then Walker has led a dozen or more lives.

He doesn’t remember much from each life – flashes, a moment here, a few minutes there. Sometimes enough to help him out in a pinch. And each time he re-incarnates he knows a little less. He’s not even sure who he is any more – all that he knows is that each time he passes through the Bleak Gate he leaves a little bit more of himself behind.

But his memories are coming back.

Walker is a man of his word, and has never broken it. Ever.

Until it comes time to move, and then he’s fast, striding through a cloud of smoke from his twin pistols.

If he has friends, none of his acquaintances know who they are.

He has bad dreams. 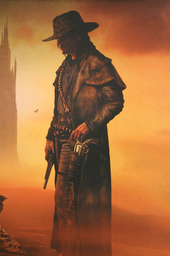